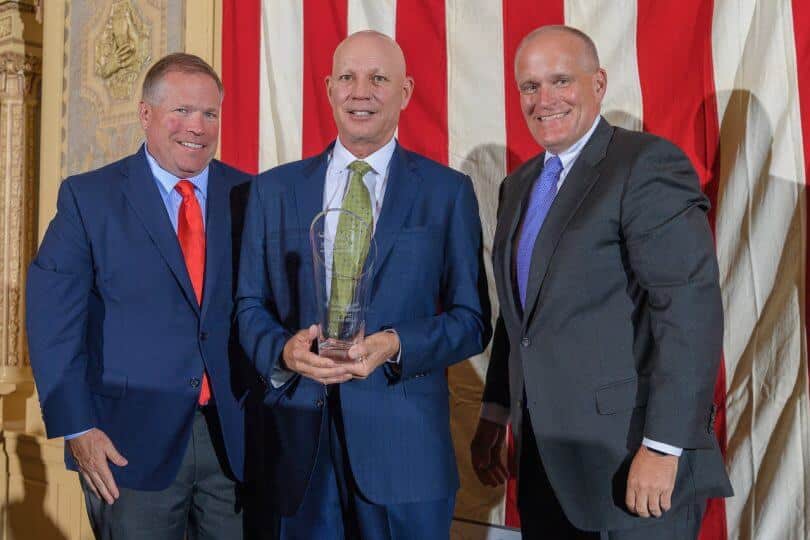 Du Pont’s sons There and Ben presented the award to Horn, with There noting he was “thrilled to see the admiration and support Charlie received at the awards ceremony.”  Du Pont said the event saw its highest attendance ever, including many aspiring entrepreneurs.

“Charlie Horn’s innovative leadership in Delaware and beyond epitomizes the Pete du Pont Freedom Foundation’s mission. Charlie responds to societal challenges by building coalitions and empowering individuals to innovate creative solutions, which mirrors many of Governor du Pont’s priorities during his years in public office,” said Scott Malfitano, chair of the foundation.

The event at the Hotel du Pont also recognized top ideas from its 2018 Reinventing Delaware program: Second Chances Farm, a social enterprise that trains and mentors returning citizens through vertical farming; and WilmInvest, which leverages public-private partnerships to renovate vacant properties to provide affordable housing for low-income families in Wilmington.

The Pete DuPont Freedom Foundation also presented its Reinventing Delaware Award to and a check for $10,000 to Second Chances Farm. The award is given annually for an organization that has an idea to make Delaware a better place to live work and play.

Second Chances Farm founder Ajit George said he and his partners, who are still in the infancy of their program, were deeply appreciative of the recognition of the value of their program. “We are thrilled to be part of a team that is creating the first vertical farm in the First State at our new home in a 47,500 square foot building at 3030 Bowers Street,” said George. “We want to thank There Dupont and Ben duPont for honoring their father Governor Pete DuPont’s legacy.”

Sherry Hoskinson inducted as a Longenecker Fellow at the USASBE conference in Los Angeles, CA